Artwork as mural by Anuli Croon for military hospital

On the concrete pillar in the central hall of the CMH Utrecht you can admire a colourful mural by artist Anuli Croon. The work of art has been realized in close cooperation with Iwaarden. All operational parts of defense, soldiers and character traits of the soldiers are woven into the work of art and convey the core values of defense and the CMH.

About the work of art

Anuli Croon created a fabric consisting of groups of elements:

All these parts are interwoven in an irregular grid of dark and light squares.

The realization of the mural

Iwaarden has realized this work of art in close cooperation with Anuli. We have provided paint-technical advice and made a plan of action, adjusted to the location, the artwork and the surface. The artwork has been unraveled with military precision and numerous painting templates have been plotted, finished and applied to the concrete pillar. The artwork came to life piece by piece, in military colours. The result: a colourful artwork that breathes the core values of defense and the CMH. 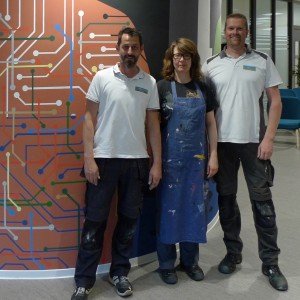 It was very nice to make this with the people of Iwaarden, really a dream team!

inspiration in your inbox